I know ” ’tis the season”, but the season for what? I pray his season finds you with the time to rest and reflect on the fact that God so loved us, that He sent his Son into this world to die for our sins, and to celebrate that good news.

As I write this I am on my way to Amarillo to retrieve my truck, load it with wood, and get back to Colorado before the next snow storm. Since this last season has been one of deadlines, travel and teaching , it is the first chance I have had since I parked it there in June.

June was filled with sculpting, a class here in Loveland, giving private lessons and a trip to Texas. We were privileged to hit the canyons on the hottest day ever recorded in Amarillo, Texas, 117 degrees. We were however, 50 miles southeast and 1,500 feet lower in elevation. Although I have never hauled logs in a convection oven, the 30 mph wind gave me a good idea of what that would be like.

From mid-September through the first week of November I taught four, one week long classes around the country. Because the class at Marc Adams School of Woodworking in Illinois was so large, I had to employ new disciplines in my teaching so I learned a lot. One really valuable improvement emerged this year, I had the students bring a video recording device to record the instruction portions of class, especially their one on one time with me. They all found this very valuable for a variety of reasons. I will eventually compile some of these into teaching videos (DVD’s).

Shuffled in with all the teaching and travels were some really challenging commissions. Some of which are shown below.

Thank you for your continued interest in my work, there are a few items on the works for sale and works in progress pages. Also, I will have a Facebook and a Linked-in page after the first of the year that I will be updating regularly. Of course this might put my Luddite status in jeopardy, but, hey, I just noticed it is the 21st century.
One more item, my new calendar is out, entitled “Movement In Sculpture”, they make great Christmas gifts, however you need to order very soon if you need them by Christmas.

Have a Merry Christmas and a blessed new Year!

Twelve sculptures, including inspirational poetry for each one composed by the artist in a 12″ x 24″ wall calendar for year long enjoyment. 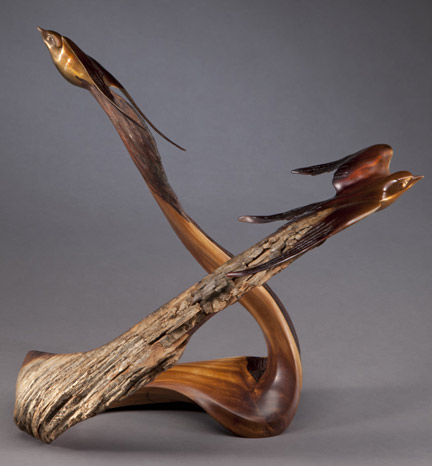 Chris is an unusual artist in the sense that he personally harvests the juniper wood for his commissioned works. He makes frequent trips to Texas for this reason. He would love to visit with you about ideas for sculptures that you would like him to do.
