Greetings,
Well, it looks like spring has finally arrived in the Rockies. I have been busy with commissions all winter and still have a couple to finish up. Here are photos of some of them. “Just a Glimpse”, Out of the Midst”, and “Subtle Approach.”

Teaching this year has not been without traveling. January found me at the beautiful facilities of Farrell Eaves in Signal Hill, Tennessee. I will be teaching there again sometime in October. In March I hosted a small class here in my studio in Loveland. I just returned from Ocean City, Maryland where I taught a three day class on movement and flow, and competed in the 2009 World Champion Ward Wildfowl Carving Competition. I am pleased to say I won first in the World Class Interpretive, for “Family Circle.” It is a real honor, for which I am very thankful.

I had a great wood hunting trip Texas in March, but admittedly did a lot of fun father son activities with my son Brent, who leaves for the Air Force Academy in June. We managed to kill a few wild hogs, catch a couple of rattlesnakes and rappel down into a Golden Eagles nest. The eagle chick was about a week old, solid white downy feathers and an attitude already. Covering a lot of new ground allowed me to find some spectacular pieces of wood, some of which we will go back for in May. We just have to figure out how to get them from point “A” to the truck. Point “A” is kind of hard to get to, much less out of with a log on the back, but I love challenges.

Speaking of challenges, I had a major one in the form of a commission which I worked on all winter. The sculpture, entitled “Rough Beginnings,” depicts a young roughneck tossing chain on a drilling rig. What started out as a wood sculpture turned out to be a tremendous learning experience. After the third attempt in wood, I finally contacted the person who had commissioned it and asked if she would rather have a bronze wood meld. She agreed that would be fine, so that is what she received. In addition to getting a good lesson in human anatomy, patience and perseverance, I learned God is able to do incredible things through our mistakes and inadequacies. What’s more He delights to help us and, as His word says, “He makes all things beautiful in His time.” The photos of this sculpture are linked here and the poem explains and amplifies what I learned. I do have a mold of the bronze portion of this sculpture and another “failed” wooden figure that I will be redeeming, if anyone is interested.

Thank you for your continued interest in my work. I hope to see many of you at Sculpture in the Park August 10-11

May God continue to reveal Himself as both faithful and mighty to each of you. 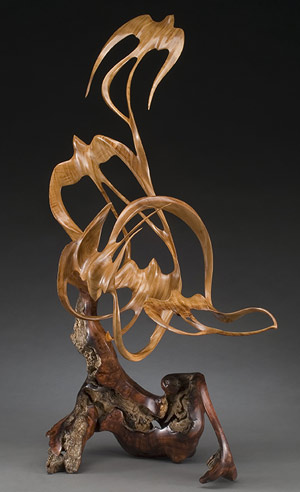